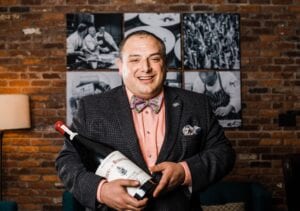 Gregory “Gary” Schwab, a native of Long Island, New York had never intended on working with wine when he began his professional life after college. After receiving a BA in Political Science from SUNY Oswego in upstate New York, he took a job as an organizer and assistant campaign director for a Non Profit in Baltimore, Maryland. However, after making plans to attend graduate school, he took a job as a server and quickly realized that the world of wine and hospitality was calling much louder than anything else he had ever encountered.
Gary began his new career  working as a server in a mall anchor restaurant in the Baltimore Suburbs. His goal was to continue down this road as long as the challenges kept coming.   Within three years of taking a job as a server, he was working as a Sommelier for Lidia Bastianich in New York City, and soon after was running a program of his own at Rare 650 Prime Steak and Sushi on the Gold Coast of Long Island.
After passing the Advanced Exam with the Court of Master Sommeliers, and building a nationally recognized program at La Cuchara Restaurant in Baltimore, Maryland, Greg’s life brought him to Tampa. He began his Bern’s career as Haven’s Wine Director and now works as the Sommelier of the Harry Waugh Dessert Room and as a sales associate at Bern’s Fine Wines & Spirits.  When he is not in South Tampa surrounded by wine and whiskey, he loves to spend time with his lovely wife Alexa, their cats Charlie and Kalis, and their dogs Lando and Jordy.

PLEASE NOTE: Our dress code is business casual. No shorts are allowed in the dining rooms, even during the summer months. For more details on our dress code, please visit our "What to Expect" section or under "About" on your mobile device. Dismiss